The danger of the metaphor 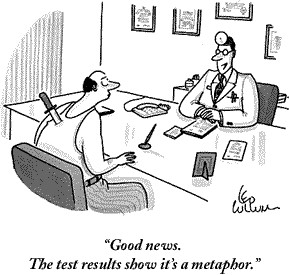 The danger of the metaphor

We all know and appreciate the power of language. It is often said that the meaning of communication is the reaction you get. Language can be positive as well as negative. Language will often evoke emotion, both good and bad. Sometimes the issue is that what is good for us can be bad for others.

Metaphors are often used too, either intentionally or at a sub-conscious level. These conjure up images that go far beyond just words. Stories can often take on significant meaning for the storyteller and for those on the receiving end. Once again meaning and interpretations will differ, depending on our own individual experiences.

Take this example: A colleague of mine has described how their company develops their business. They chose the metaphor of whale hunting, saying how they are not interested in pursuing the small fish but only interested in chasing the big accounts, the giants in the sea. Often the whales aren’t caught, but when one is landed then it makes all the effort so worthwhile.

Ouch…! Although I can see where this company is coming from, the metaphor of a whale hunt is not something I enjoy. I like whales. They’re fellow mammals. They’re understood to have many endearing qualities, many of which are associated with our own human species. I have also seen footage of a whale hunt. Not a pretty site. And I’ve also seen pictures of how a whale is butchered and then left to rot once it has been chased down, stripped of all its ‘valuable parts’. I’ll spare you my thoughts about how the products are produced from the whale. I think you know where I’m going….

My learning from this use of metaphor is that we really must choose our language, words and metaphors very carefully. The intention may be positive yet the impact can be very negative. The image that I have of the company who see themselves as whale hunters and their clients as whales to be hunted does not work for me. It clashes with my own values and philosophy of how business should be done.

Please think carefully about the language and metaphors that you choose too. The meaning of communication is very much in the response that you’ll get.