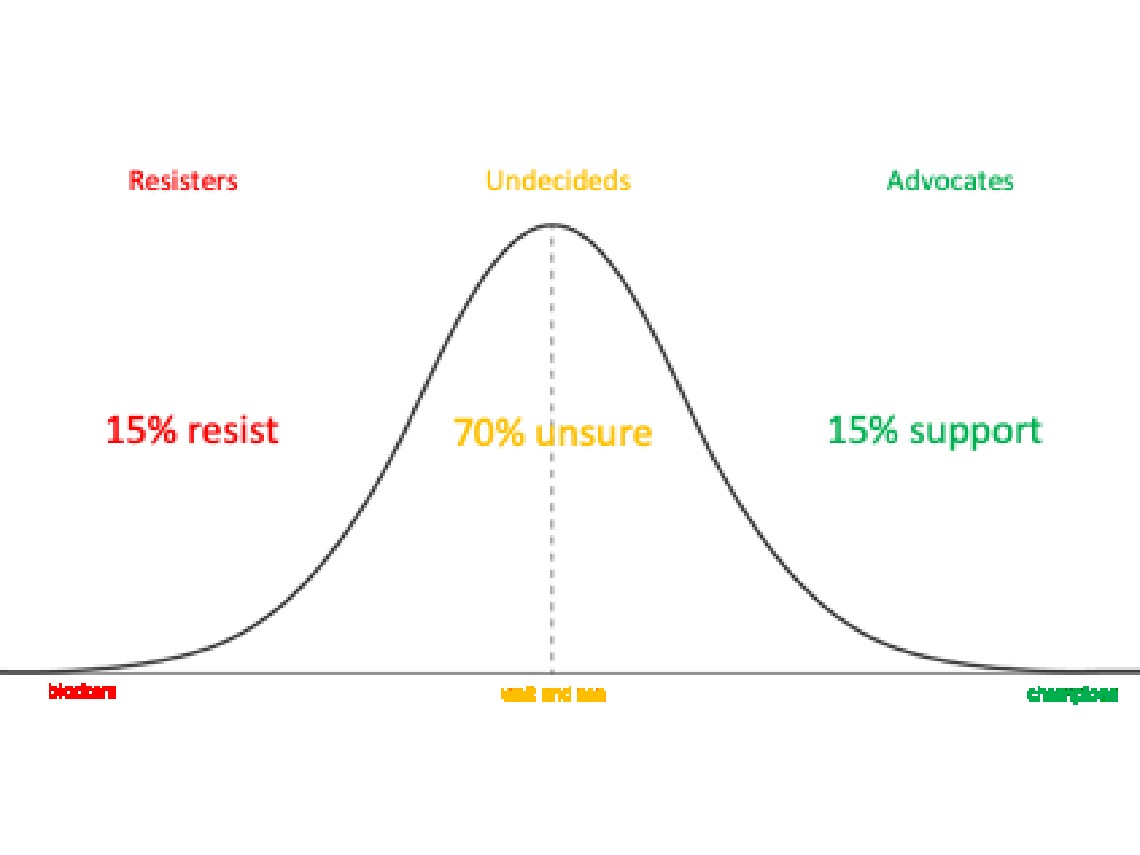 People often fear change. This may be due to a sense of win or lose, previous poor experiences, the fear of the unknown or maybe just down to the personality of the person involved – some people are more comfortable with change than others.

So, when winning hearts and minds when managing change, where do we begin?

Take a look at the graph above. According to The Ken Blanchard Training Companies, around 15% of people support change. Although this is good news another 15% resist change. The remaining 70% remain undecided – open to influence either way.

Here’s more information to consider about the advocates. - these are your champions, the people who see the need for change and the benefits. They may also see issues ahead but view these as obstacles to overcome rather than barriers. Enthusiasm is contagious and given the right tools and techniques they will carry the flag. Your advocates will help implement the change by bringing people along, turning the undecideds and even the resisters into supporters of the change.

How about the undecideds? These people are those who are yet to be convinced that any change is necessary. They also may not feel impacted by the change or feel that the change will not make any difference to the way they work. But they are even more likely to be those who are open to be influenced as to whether the change is for good or for bad, positive or negative. They are in the ‘could go either way camp’.

The resisters are those who feel that the change is negative. They may well view themselves as those who are likely look to lose the most as a result of the change. At worst they can be viewed as blockers and will actively discourage change – and possibly even sabotage it. Their negative views can dissuade those who are undecided, feeding off uncertainty and spreading unhelpful rumours. Or maybe the resisters are not negative at all - they are simply people who are yet to be convinced and display defensive behaviours as a result.

So, as a manager of change which group do you focus on – the advocates, the undecideds or the resisters? The answer is all of them.
The next question is in which order? There needs to be some sense of priority because a change manager, however good they are, cannot change everything all in one go.

Here is our recommendation of where to focus, where to shine your torch.

Start with the advocates. Find your change champions. Bring them into your group so that they fully understand and buy into your change. Let them become your flag bearers and help deliver your change message but, maybe, in their own way. Encourage them to engage with others – particularly those who can be described as the undecideds. Share information that can be shared so that they can win over others. Focus on emotions and as well as logic. Support and coach them so they are well equipped to deliver the key messages.

Providing your change champions with the knowledge and skills will help the undecideds move towards the advocates group. Eventually critical mass will be reached as shown in the graph below.

Engaging the undecideds is key. Only then can critical mass be achieved, winning hearts as well as minds.

So, what about dealing with the resisters?

Feeling negative about change is not un-normal. In fact, it’s perfectly normal. Let's remember that he human species is hardwired to survive. Thousands of years ago our fight or flight mode enabled us to survive against our predators. Today’s sabre-toothed tigers are change programmes, mergers and acquisitions, employee moves and threats of redundancy. As managers we need to address concerns rather than simply rely on the advocates to do our work to persuade others about the change.

Status: how will this be affected (+ or -)?
Make sure your team see a positive in their new status, how it will be viewed by others as well as themselves.

Certainty: information vs misinformation? Make sure as many facts as possible are to hand – remove the risk of rumour and negativity filling the information vacuum.

Autonomy: what say do they have?
Enable your team to contribute to how the change can be effected. Ask them for their input and ideas to how the new environment can work positively.

Relatedness: inclusion or exclusion? Make sure your team always feel included – watch out for accidents such as missing team members from emails and meetings. Ensure relationships are (re)built following the change.

Empathising with people’s concerns will help. However, there will always be some people who, for whatever reason, will resist. In these situations, leadership is required to deal with any unwarranted resistance. Such situations need to be handled with sensitivity and dignity.